@haorpington students enjoyed a trip to Christie's Auction House today with @HFexperience and listened to a fascinating lecture on Art History. https://t.co/cRcV3kvrJN

Last week we were delighted to invite our year 7 parents to come and meet their child’s tutor. It was great to praise the students for the excellent work they have achieved in their first half term. https://t.co/n1gNtjKb3E

Why not take part in our huge range of clubs and activities? #enrichment #sports https://t.co/RuThb4h3r3

Congratulations to Marco, one of our students, whose passion and talent for cycling is being recognised at a national level. Full story here: https://t.co/yp8Mcv5zVP https://t.co/Bjb6fN9skn

Our Year 10's and 11's had the privilege of enjoying a brilliant performance of An Inspector Calls performed by @theglobeplayers this afternoon. It really helped to embed their learning for their GCSEs! #englishgcse #aninspectorcalls https://t.co/VSDAQj3PQk

We are very proud of Louis, Year 8, whose story 'Evil' has been selected for publication in the @YoungWritersCW anthology of creative writing in schools. Read it here: https://t.co/MAAih9I7FX

Emma, Y11, writes about a project she helped with in Uganda during August 2019, living there for two and a half weeks. https://t.co/fU0b4RLJVA https://t.co/FeeR1NFW96

Last Monday, 33 students visited the Oval Cricket Ground to watch @surreycricket vs Nottinghamshire. Watching such high level cricket has inspired our students to practise their skills on the playground and they even got some signatures! #getactive #sports https://t.co/c5W3Ec3jjC

Don't miss our careers event for years 10 and 11 tonight between 4:00pm and 6:30pm. There will be a number of Post 16 educational providers exhibiting and delivering small workshops to promote their opportunities! #Careers https://t.co/UUFgHWn3Lg

Congratulations to the Years 12/13 sixth form team on a superb 5-0 victory against St Johns last Wednesday afternoon in their first competitive football league game this year. Throughout the game HAO were dominant, maintaining a lot of possession, creating lots of chances!

We are delighted to have achieved 17 of the ‘super’ Grade 9s, which are equivalent to getting an A**. A fifth of drama students achieved a Grade 9. #gcseresultsday2019 https://t.co/RgXyWNMh6u

28% achieved the prestigious and challenging Ebacc qualification which means they successfully passed in Maths, English, Science, a Modern Foreign Language and a Humanities subject. This is higher than the recent national average (24%). A significant achievement for @haorpington https://t.co/4jo3KPPxeh

Hard work pays off @haorpington as 78% of students achieved a Grade 4 or higher in English this year and 67% did so in maths. The students could not have worked harder! #gcseresultsday2019 https://t.co/pcJpfZR5QK

The Summer Edition of The HAO Post has been delivered to students! Have a look inside to find out what the Academy has been doing this term: https://t.co/u5F6GqKHrn #schoolnewspaper #summerbreak

This is the final week or the year. Please ensure that your child has 100% attendance as we will continue to learn until the end of the day on Friday. We hope you have a fantastic Summer!

We'd like to congratulate Marco (pictured in orange below), one of our students whose passion and talent for cycling is being recognised at a national level.

This year was Marco's first year racing in the under 16s. Marco managed to impress coaches and riders alike and has been awarded a spot in the British Cycling Regional School of Racing. This is an amazing achievement. To be awarded a spot in the Regional School of Racing you have to show keen racing skills and also have competed in British Cycling accredited races across the country. 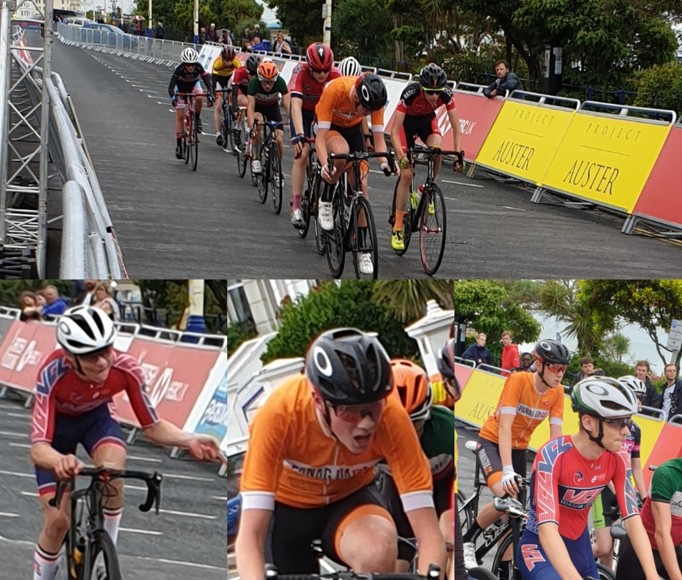 While most youngsters were sleeping late and lounge around a pool in the Summer holidays, our Marco trained and raced against some top flight bike racers in Belgium for three weeks! Marco races for the Panagua cycling team, based in Hayes.

Apart from his busy school commitments, Marco is training super hard, currently coached by a British Cycling Coach. From January, Marco will be coached and looked after by Trevor Court, a former performance coach for Team Dimension Data, a professional World Tour Team of Mark Cavendish.

Apart from training and racing this year, Marco also rode 160 miles in one day, raising £350 for Qhubeka, a charity very close to his heart. Qhubeka mobilise kids in Africa with bicycles so instead of walking 20kms to school every day, they can now ride to school.

Ultimately Marco's ambition is to be a professional cyclist!

Well done, Marco, for everyone at Harris Academy Orpington.